First-ever UKI trial comes to the interior of Alaska

K9 enthusiasts in Alaska got the opportunity to participate in a new venue for competition, and by all accounts, it was a successful event.

Solstice Dog Sports, LLC (SDS) recently held the first-ever UKI trial in the state—a two-day event in Fairbanks that was a rousing success. According to one of the trial organizers, Michaela Krohn, the group had a lot of hurdles to overcome to pull it off. “Our climate represents a big challenge for those in our sport,” she explains. “It’s basically too cold to train or compete outside from about October through April. Indoor facilities are in short supply and our dogs just don’t have the opportunity to train year-round. Those limitations put them at a distinct disadvantage when competing against dogs whose owner-handlers can work with them throughout the year.”

The team at SDS were determined to find a way to host a UKI trial, convinced that there would be enough interest in the area to draw a competitive field. Their mission, from the start, was to promote dog sports in the interior of Alaska. “There are so many people here who are passionate about competing with their dogs,” Krohn says. “We were determined to try to provide them with the best possible experience—and a UKI trial was the way to make that happen.” 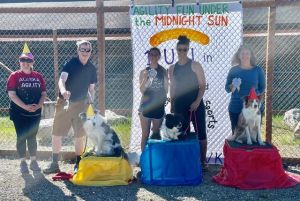 After forming a new organization and obtaining insurance, they reached out to the Tanana Valley Kennel Club and worked together to bring Tracy Sklenar to interior Alaska, to teach a seminar for the Kennel Club and judge the UKI trial for SDS. This was all part of a week-long Agility Palooza that included two seminar days with Tracy, the two-day UKI trial, another seminar day and then an AKC trial the following weekend. Equipment and location were shared between the two groups and exhibitors from around the state attended the events, some traveling from over 300 miles away. 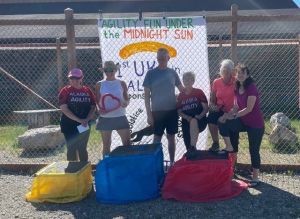 When June 11th rolled around, the SDS team was nervous but excited: “We had a much bigger turnout than anyone expected, with over 380 runs in two days. And for a brand-new effort in such a remote location, we felt very well-supported by the folks at UKI. Many of the competitors remarked on what a noticeable difference they experienced from past trials—the courses had great flow, the atmosphere was relaxed, and although everyone there was committed to training and competing at an extremely high level, they also just really had a good time. Smiles all around—including on the dogs’ faces! UKI was so easy to work with, and we are all looking forward to staging another trial in August. We hope this marks the beginning of a long and productive relationship with UKI to promote outstanding opportunities for dog sports in Alaska.” 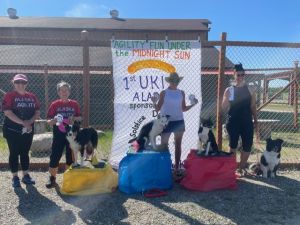